Joined 11 mo ago
·
14 Posts
i have a 2004.5 and the hydroboost is leaking. I have read a number of threads about using the LML hydroboost but seem to find more than one part number... Any wisdom is much appreciated!

Joined Jan 16, 2016
·
105 Posts
I put AC Delco 178-0853 which Amazon says fits 2011 (but not our 2004.5's, but they're wrong). Here's the review I wrote:
---------
I learned about this upgrade for the older trucks on a diesel truck forum. I also installed ACDelco 20756713 GM Original Equipment Power Steering Pump as an upgrade. Since new, my vintage of the diesel had 2 less-than-great problems: (1) idling, turning, braking at the same time often suffered a hard steering wheel, and (2) not the greatest stopping and pedal feel during heavy braking.

The pump solves problem #1. This hydroboost seems to solve #2 (I've only done a few test drives so far, but I am impressed!!). This hydroboost, unlike the 2004 original, actually increases power braking assist the harder you press.

The push rod, where it attaches to the pedal, has a little slop (on purpose). As you press the pedal, the rod presses the brake switch first, then as you press further,the eyelet in the rod makes contact with the pin on the pedal. Fearing this problem, I slightly elongated the eyelet towards the hydroboost to ensure the brake switch engages. It might not have been necessary.

Also, the rod is slightly longer so the brake pedal is raised slightly (sorry, I didn't measure before and after). Since I always thought the pedal throw was a little short, this is a good thing.
-------------
It's been over 7 months now and several trips, and the brakes still work WAY better than they ever have. Some people had problems with the brake light switch, which is why I elongated it just a little. If I was assigning a letter grade, I would have given the original brakes a C+, and my upgraded ones a B+.

Joined 11 mo ago
·
14 Posts
Awesome! thanks for the writeup. I don't know why, but i didn't find that on the dmax forum. must have used the wrong search words. I have read of some drilling out the actuator rod and others swapping the rod from their old unit. wonder which works better?

Always replace with new....you don't want to be playing contortionist up under the dash again in 6 months.....plus with new, there's no swapping the plunger over.
PULL the driver's seat out....4-bolts and you'll be in Heaven, stretched out and comfy with your legs in the back seat. :howdy

One of the original draws toward using the 2011 HB, it was cheaper.
There is info posted on the exact drill bit size to open up the plunger hole a tad bit, so that the brake switch works properly.

I suggest buying a new clip that holds the rod and brake switch on. Good thing I did because after fighting to get the old one off for an hour, I gave up and ripped it off (still wasn't easy!).
Click to expand...

Save yourself some headache time, pick up one of these tiny extended length screwdrivers to release that demon clip. 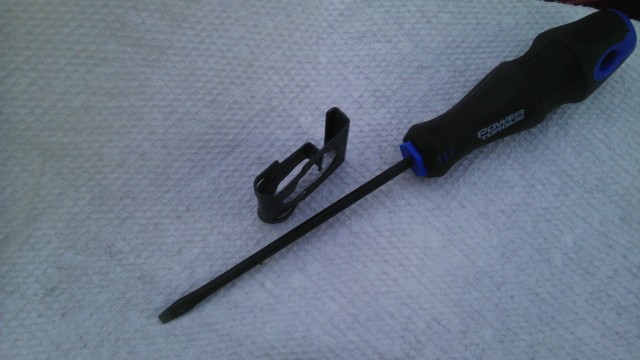 Joined 11 mo ago
·
14 Posts
Thanks for all your help and wisdom!

Joined Aug 20, 2012
·
2,383 Posts
Wish I knew about this two years ago when I replaced hydroboost and steering pump. I've never been a fan of the brakes and sometimes get a grinding noise in the steering when turning while parked

Joined May 31, 2008
·
26,283 Posts
If you want to introduce longevity and performance to your steering and brake boost system, for as little as $30, you can easily add a PS fluid cooler to the mix.

Joined Nov 7, 2015
·
458 Posts
I have done everything except replace the Hydro and the brakes still suck. I have done the Hydro check and it's in my opinion kind of inconclusive as a test goes. Also, remember when you add volume pressure decreases so adding the cooler can add to an existing problem. I will be performing another Auto bleed this weekend with an immediate vac bleed on the system to see if it helps BUT I absolutely LOATH the brakes on this truck.

I am hoping from everything I have read that Vac bleeding will be the final fix, All the years of wrenching on cars I have never had such an issue with brakes.
► Show Full Signature
2006 SIERRA CC SB 2500HD 6.6 LBZ 179,000 and ticking
3" MBRP Down Pipe
4" Diamond Cat Back
5" SS tip
Edge CTS2
Intake resonator Plug
EFI LIVE DSP5 by ATP via BBP
AIRDOG2
Interior lighting to BLUE LED conversion
285/75/16
Leveling keys POWERSTOP Brakes.

Also, remember when you add volume pressure decreases so adding the cooler can add to an existing problem.
Click to expand...

Joined Sep 25, 2016
·
2,660 Posts
There is more than one way to skin a cat. When I remove that clip from the brake rod at the pedal I usually use two screw drivers. I wedge a smaller pocket screwdriver between the pin and the arm on the clip and then use a longer screwdriver like Hook showed to pull it back to the release position. I'm sure there is a special Kent-Moore tool for the job as well as a dozen other options but that is what works for me.

The nice thing is that the clip goes back on with just fingers. I'm sure that is why they use it in the first place. It's all about assembly, not disassembly.

Years ago, the original draw to the newer (2011 year only) HB, was mainly cost. Extra push on the pedal was a plus, but cost was the draw. For some reason at the time, new HB units for the LLY, LBZ, LMM, were ridiculously high and most were Remans, not new.

Your choice. But as stated in post 5, don't go reman. It won't last and you'll be back in playing contortionist up under the dash in 3-6 months. Plus the mess of leaking PS fluid, and the danger of toasting the pump from low fluid levels.